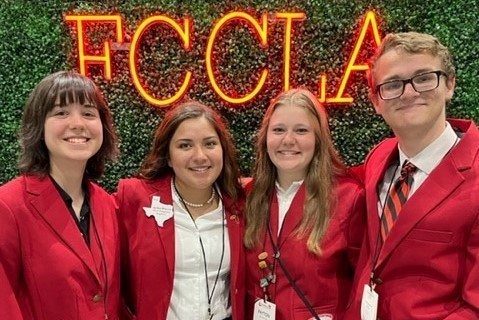 Miles FCCLA on the National Stage

Jonathan Baca received on stage recognition as one of three Access Scholars from across the nation. He also volunteered to help run the FCCLA LifeSmarts Knowledge Bowl as scorekeeper.

Jackie Meyers fulfilled some of her duties as a Texas region officer by volunteering to help with the Chapter in Review Display Students Taking Action with Recognition (STAR) event.

Payton Branham and Cecelia Fritze were in the top ten and received a gold medal for their score with their STAR event in Hospitality, Tourism and Recreation Level 2. Their specific placement will be released later this month.

Their advisor is Paige Ernhart who also volunteered as an evaluator for STAR events. The students and their advisor attended many sessions and workshops in order to bring back new goals and ideas for the local chapter, classroom and community.

The national attendees had fun as they traveled with the Texas delegation to a beach party on Mission Beach, a dinner cruise, the San Diego Zoo, and an After Party. The Miles group also took a ferry to Coronado Island to see the Del Coronado Hotel, walked to tour the USS Midway and Sea Port Village, and ate at Little Italy and the Gaslamp District.

A special thank you to Lane McFarland for meeting the group at 3 am for transportation needs, Joan McCleery and Kati Briley for all of the extra finance paperwork, and Lela Taubert, Clint Askins, Steve Long and the Miles ISD School Board for the administrative support throughout the whole process. Thank you Miles community and school personnel who donated and/or bought items to support the Miles FCCLA chapter.